Opening ceremony in the “Alten Schloss”

Amidst the historical and festive backdrop of the Alten Schloss, Stuttgart’s Lord Mayer Fritz Kuhn officially opened the Christmas Market on Wednesday, 29 November 2017, 6pm. Numerous brightly-lit Christmas trees and stars for as far as the eyes can see – the magnificently decorated inner courtyard provided the perfect setting. The Hymnus Choirboys, the Stuttgart Music School’s wind section and the Popchoir im Musikwerk Stuttgart all create a unique festive season atmosphere.

25 metres high, beautiful all around and fully grown, densely branched is how the Norway Spruce adorning the Schlossplatz square can be described. New LED Christmas tree lighting with about 40,000 lights and almost six kilometres of wire along with a star measuring two-and-a-half metres at the top give the stately Christmas tree a magnificent appearance.

Following the opening ceremony, the tree, one of Germany’s tallest at a Christmas market, was officially lit. It uses green electricity from the city’s own power company. 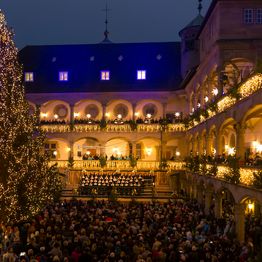 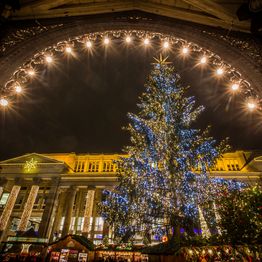